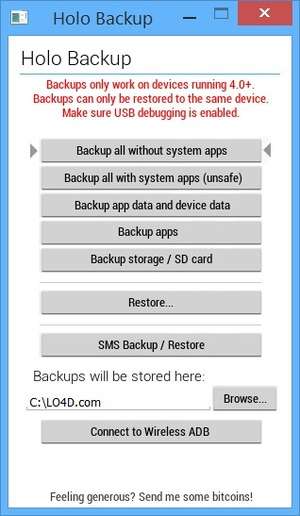 A review of Holo Backup by Tina de Pierre

Formerly called "Simple ADB Backup", Holo Backup is a free utility which can backup the contents of an Android device without the requirement for root access.

The application is easy-to-use and facilitates backup data up with just one click, but the phone or tablet must be running a version of Android 4.0 or above. USB debugging must also be enabled.

The main windows of Holo Backup includes one-click access to backing up the Android phone with or without all apps, system data, data only on the SD card. It can also quickly restore data from a previous backup. At the end of the list is the option to backup or restore SMS messages.

For each backup, you may select exactly which apps and files should be backed up from the phone's filesystem.

Holo Backup is a good tool which does not require root and can be useful for downloading the data from your phone from time to time as to avoid data loss.

Holo Backup is software which can backup phone data.

This download is licensed as freeware for the Windows (32-bit and 64-bit) operating system on a laptop or desktop PC from mobile phone tools without restrictions. Holo Backup 2.0 is available to all software users as a free download for Windows 10 PCs but also without a hitch on Windows 7 and Windows 8.

Compatibility with this cell phone backup software may vary, but will generally run fine under Microsoft Windows 10, Windows 8, Windows 8.1, Windows 7, Windows Vista and Windows XP on either a 32-bit or 64-bit setup. A separate x64 version of Holo Backup may be available from OmegaVesko.